home Go back to home
menu Menu
Salvation
By SusyQ918 Posted in Reviews on October 4, 2021 0 Comments
Previous Next

Reformed gang boss Dante Pope is out after a four-year stretch in prison. But freedom has found him faster than he’s ready for. His only brother hates him, and with nothing but PTSD and a newfound fascination with plants for company, the outside world is a terrifying place.

A prisoner rehabilitation scheme lands him at a stately home that might as well be the moon. Working for gorgeous gardener Sid is a welcome distraction—his shoulders are broad, his rugged jaw unshaven, and his long, tanned legs?

But Sid has problems of his own. A life-changing disease has left him limited in ways he can’t bear and accepting help, even from a stranger, makes him want to curl up and die.

If Dante would let him.

Newsflash: he won’t, and he’s not a stranger for long. With his dark smile and sinister ink, Dante Pope is the most beautiful man Sid has ever seen. Life is hard, but falling for each other is easy.

​​​​​​​Old ghosts can haunt Dante all they like. Loving Sid is the only salvation he’ll ever need.

Salvation is a book about second chances and what happens when a guy who feels like he deserves nothing meets a guy that he thinks deserves everything. Sid is a master gardener who struggles every day to keep his disability under control, but with a job like his and for a guy who loves the outdoors, it’s not hard to do too much.

In the midst of all this is Dante, a man released from prison for good behavior to help Sid with anything he needs, but his old life is not so hard to escape. Despite his good intentions, Dante gets pulled in one more time if he wants to keep Sid safe.

I enjoyed this book for multiple reasons. The steam level was to the roof, five stars but I also really appreciated was the way that Sid’s disability was handled. MS is a real thing and there are no real ties that indicate who gets MS and who doesn’t but it can be debilitating. This story gives us a realistic expression of Sid’s life and Dante’s fierce respect and love for this Master Gardner. 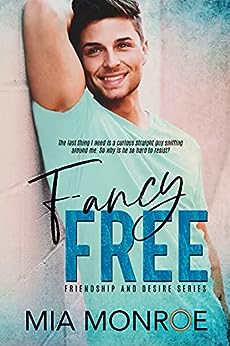